"The Edie Goetz Estate" is a trophy compound in the heart of Holmby Hills, sited on two contiguous properties and totaling over 4.38 acres. Available for the first time in over 25 years. A magnificent example of Georgian Revival architecture originally completed in 1938 and designed by Gordon Kaufmann, classic elements include high ceilings, grand public rooms and ornate wrought iron details. In 1947, Edie Goetz engaged legendary Hollywood designer Billy Haines to enhance the main house as a showplace for lavish events. One of the most iconic rooms is the paneled art deco modern library/bar also designed by Haines. On what many consider the finest street in Los Angeles this private paradise is set behind large gates and offers complete privacy. Features of the estate include: verdant manicured grounds, 3 guest houses, 2 swimming pools, tennis court, and rare specimen trees. A rare opportunity to own a piece of Hollywood history.

Manhattan Resale Home Prices Tumble the Most in Four Years 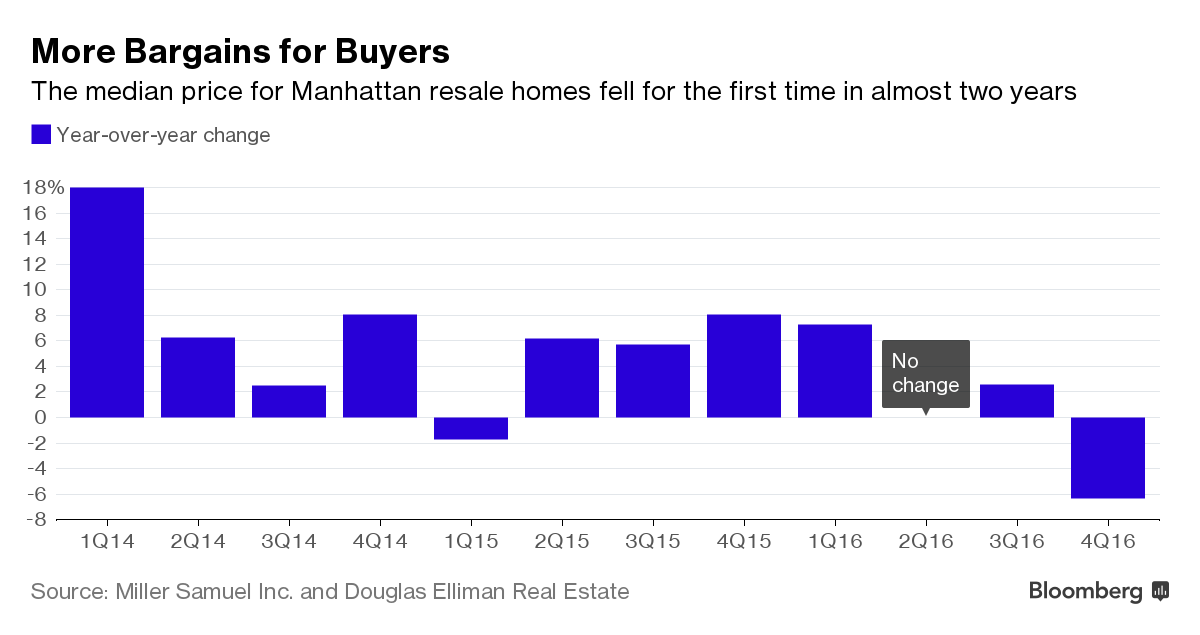 Why Manhattan Luxury Co-Ops Are Losing Their Luster

Manhattan resale home prices tumbled by the most in more than four years, a sign that sellers are lowering their expectations in a slowing market where buyers have the option to walk away.

The median price of previously owned condominiums and co-ops fell 6.3 percent in the fourth quarter from a year earlier to $900,000, according to a report Wednesday from appraiser Miller Samuel Inc. and brokerage Douglas Elliman Real Estate. It was the first annual decline since the beginning of 2015, and the biggest since the third quarter of 2012, when resale prices dropped 8.1 percent.

Manhattan apartment sellers who set aggressive price goals over the past few years are coming back down to earth as inventory mounts. They’re adjusting to a market in which the number of resales has been dropping for five quarters and buyers are turning away from listings viewed as too expensive. In the fourth quarter, the average discount off the last asking price was 4.7 percent, compared with a 3.1 percent cut a year earlier, the firms said.


“Maybe we’re heading out of the period when there was no shame in overpricing your home,” Jonathan Miller, president of Miller Samuel, said in an interview. “We’re moving away from that and into something more pragmatic: Do you want to actually sell your property or do you want to pretend? Part of selling is pricing correctly or being more negotiable.”

Buyers agreed to pay more than the asking price in just 13 percent of all sales that closed in the quarter, down from 29 percent a year earlier, the firms said. They also are taking longer to make a decision: Previously owned properties that sold in the period spent an average of 80 days on the market, up from 71 days a year earlier. Manhattan resale deals totaled 2,385, a decline of 1.5 percent.

“We saw buyers acting a lot more aggressively with their bidding,” said Pamela Liebman, chief executive officer of brokerage Corcoran Group, which released its own report Wednesday that showed a decrease in sales for the quarter. “They didn’t hesitate to come in and make low offers. A lot of sellers remained unrealistic throughout the year, and that killed a lot of deals.”

Rex Gonsalves, a broker with Halstead Property, thought $715,000 was a fair price for a one-bedroom co-op apartment in Chelsea with an outdoor patio. But after one month on the market, the best offers that came in were about 30 percent lower, he said.

The sellers agreed to cut the price twice in two months, bringing it down to $649,000. That attracted two offers -- one below the asking price and one above it, Gonsalves said. The 16th Street apartment sold in December for the higher price, $659,000.


“This isn’t a market where you go into a bidding war,” he said. “When we got this offer over ask, the sellers said, ‘This is great.’ It really helps to have savvy sellers, who understand the  market.”

Halstead, which released a joint report with brokerage Brown Harris Stevens, said the average price of resale co-ops fell 2 percent from a year earlier to $1.25 million, while the average for resale condos remained about the same, at $1.99 million.

Corcoran Group reported that all completed sales, including previously owned and newly built homes, dropped 15 percent from a year earlier to 3,104. Signed contracts also slid 15 percent. Downtown Manhattan, below 34th Street through Tribeca, was an exception. Sales in that area climbed 11 percent to 983. Inventory jumped 33 percent to 1,826 listings, according to the brokerage.

Boroughwide, the supply of resale and new-development homes climbed for a fifth consecutive quarter, Miller Samuel and Douglas Elliman said. There were 5,393 apartments on the market at the end of December, up 6.9 percent from the end of 2015.

The number of choices, combined with the prospect of rising interest rates, could mean a more robust year of sales ahead as more sellers reduce prices, Miller said.

“Perhaps their resolution for 2017 is to be in sync with the market,” he said. “You price it correctly, it sells.”

Newly built and set behind gates this striking Architectural home is sited and designed to maximize the spectacular views. A private drive and zen like cascading water features lead to a dramatic entry with soaring spaces and sliding floor to ceiling walls of glass. Unmatched for indoor/outdoor entertaining, with expansive decks, pool, spa and outside dining area. Top of the line finishes throughout. Stunning gourmet kitchen boasts a massive center island, wet bar, breakfast bar and sensational glass wine room. Four ensuite bedrooms on the top level include a gorgeous master suite with soak tub, double sinks, walk in shower and panoramic views. Other features include an office and downstairs theater. 3 car attached garage with additional parking. An entertainer's dream home and priced to sell!

.
The median home value in Scottsdale is $414,100. Scottsdale home values have gone up 4.0% over the past year. Zillow predicts they will rise 2.1% withiin the next year.

The median home value in Carefree is $740,800. Carefree home values have gone up
4.3% over the past year.  Zillow predicts they will rise 2.1% within the next year.

Spectacular views in a spectacular Paradise Valley location nestled into the hillside of Mummy Mountain. This rare opportunity offers the buyer the chance to choose many of their own stylings. The spacious design by CP Drewett of 4 bed plus office, 5.5 baths, 6900sq.ft combines a refined, yet modern architecture with a time neutral palette. The modern Dulthaup designed kitchen combines all of the finest contemporary offerings. Experience your private resort style negative edge pool, spa and outdoor kitchen. The exceptional glass 4 car garage with extra storage is truly a car lover's dream. A Casita with garden shower are just some of the many distinct offerings included in this remarkable home.

Ocean, sunset and fairway views over La Jolla Country Club from this single level residence. This is 2 of only 5 homes on Fairway Rd with NO other homes across the street. Remodeled in 2007/08, this 3 bed + office, 3 ba home is in move in condition. Compare location, condition & price. Features include: distressed walnut hardwood floors, cathedral ceilings, skylights, new dual pane windows and doors, flagstone patio, fire pit, pergola and artificial turf and so much more.

The median home value in San Francisco is $1,132,300. San Francisco home values have gone up 1.3% over the past year.  Zillow predicts they will fall -0.3% within the next year.

The median home value in Sausalito is $1,246,200. Sausalito home values have gone up 4.4% over the past year. Zillow predicts they will rise 0.5% within the next year. 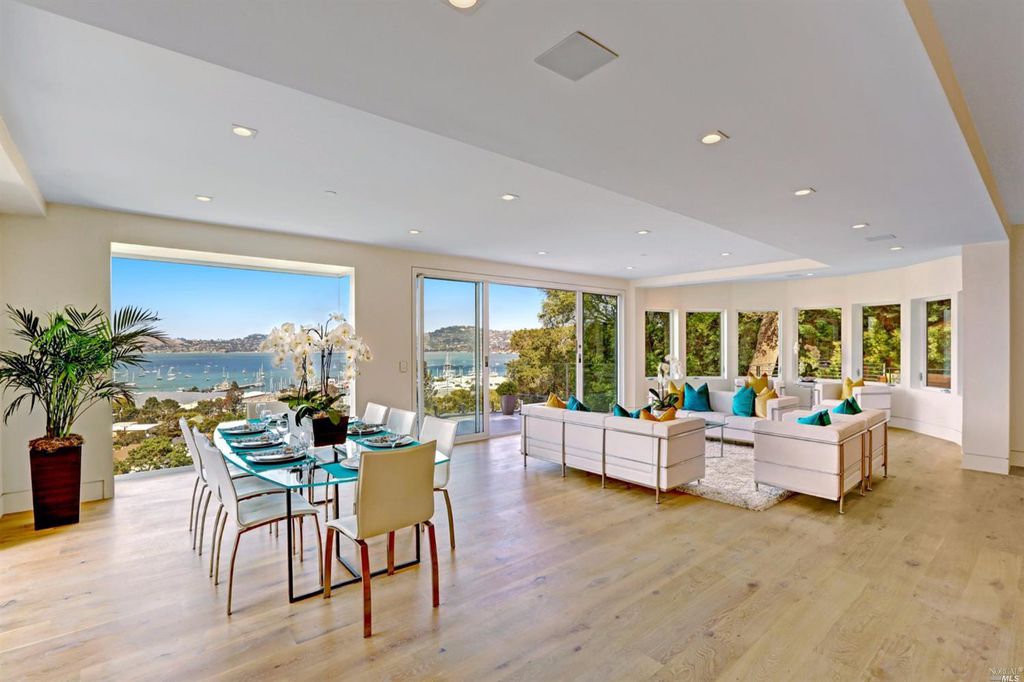 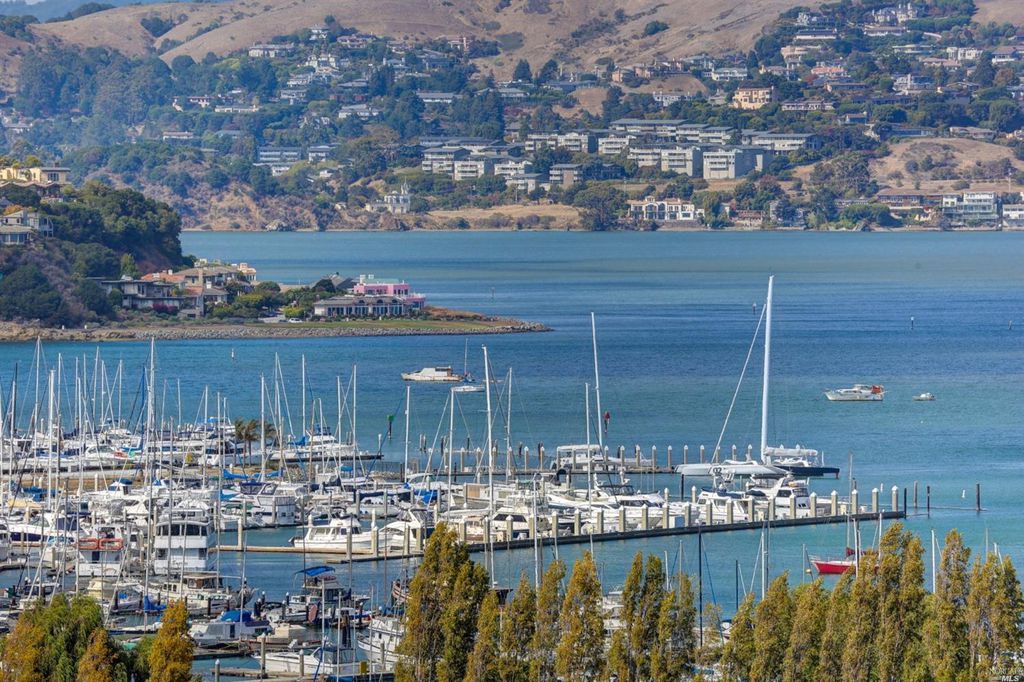 The median home value in Seattle is $612,400. Seattle home values have gone up 13.3% over the past year. Zillow predicts they will rise 5.9% within the next year.

The median home value in Bellevue is $744,800. Bellevue home values have gone up 13.3% over the past year. Zillow predicts they will rise 5.5% within the next year.

Luxurious, Signature Collection home by Murray Franklyn on a grand scale! An unrivaled two-story with space for crumpets and tea, a Betty Crocker bake-off, coffee and conference calls, a grandparent's wing, foosball and Xbox, piano and study time, wine and outdoor fireside chat, and enough bedrooms for Eight is Enough or the Brady Bunch! Idyllic setting on a generously sized, level home site. Covered outdoor living area, fireplace and grassy, playful back yard. When your lifestyle happens at home!

Mortgage rates were slightly higher today, on average, but some lenders were unchanged from yesterday.  Others were quoting higher rates in the morning and then issued positive reprices in the afternoon (i.e. mid-day improvements), bringing them back in line with the rest of the pack.  In the slightly bigger picture, rates remain closer to 4 week lows.  Since Dec 8th, only yesterday was any better.

4.25% remains the most prevalent conventional 30yr fixed quote on top tier scenarios.  Some of the more aggressive lenders are still down at 4.125% and a few haven't made it down from 4.375% yet.  Compared to yesterday, today's movement would only be seen in the form of slightly higher upfront costs (as opposed to in the "note rate" itself).

With 2 days down, 2017 is shaping up to be less threatening than it might have been, considering the  market movement at the end of 2016.  But to whatever degree we have NOT seen anything too troubling so far this week, neither have we seen solid cause for celebration.  In short, rates are in a holding pattern--albeit at an altitude with slightly more oxygen.

Bond markets seem to be planting their heels in the mid 2's on the 10 YR bond.  It is good news to see rates hold steady here , but we can't assume this is a firm ceiling yet.  We will have to wait to see what the next couple of days of data brings to the table.  Locking continues to be the only option for now.  We have seen dramatic spikes higher in mortgage rates too frequently since the election to be taking risks just yet.  -Gus Floropoulos, VP, The Federal Savings Bank

Bonds sold off slightly today, as traders looked to Friday's NFP jobs report.  There's still no definitive trend here, and I don't see the potential for meaningful pricing improvement until we get some bearish economic data.  The smart move (to me) remains locking early.  Floating COULD yield some small gains, but likely not enough to justify the risk for all but the most risk tolerant clients. -Ted Rood, Senior Originator

Thanks for reading today's Blog.  Looking for more information?  Have a comment?  Please call, text or email me.  Most importantly, have a great day!